State Farm is investing $30 million in Arizona State University in an effort to help people develop new skills in the rapidly changing workplace. 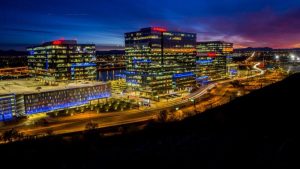 Michael Tipsord, chairman, president and CEO of Bloomington, Illinois-based State Farm, was in town Tuesday to announce the investment in a new education and career development program called Pathways for the Future. The program takes a personalized approach to higher education with a focus on innovation and technology skills.

The insurance giant has been a good friend to ASU for the past several years, university President Michael Crow told a group of business and education leaders at the inaugural virtual Future of Workforce Summit hosted by ASU and State Farm on Feb. 4, at which the investment was announced.

The $30 million investment is taking that partnership to the next level.

“State Farm has a long history of supporting education,” Tipsord told the audience at the virtual summit.

This financial commitment to ASU builds on a similar program State Farm created in 2017 with Georgia State University in Atlanta.

ASU’s online program will focus on students from high schools, community colleges and universities, as well as career professionals who want to compete for new and evolving jobs.

Plans call for offering degree and certificate programs with minimum upfront costs and reduced tuition options for several education tracks, including engineering, business and liberal arts/sciences, according to the new website for the program.

This effort comes at a time when advancements in technology and innovation — such as artificial intelligence, robotics and biotechnology — are changing the way we live and work, Crow said.

While this transformation holds promise, it brings new challenges to employers, students and the workforce as they adjust learning outcomes, occupations, workforce responsibilities and even the nature of work itself.

Tipsord said he doesn’t view the $30 million as philanthropy, but rather as an investment.

“My concern is technological advancements that are occurring in today’s society have the real risk of leaving segments behind — it’s not inclusive,” he said. “So how do you combat that. You combat that through the continued upskilling of individuals.”

State Farm, which has hired thousands for its regional headquarters in Tempe, is the anchor tenant within the 2 million-square-foot Marina Heights commercial development built on land owned by the Arizona Board of Regents near Tempe Town Lake.

Back to News
Next