PHOENIX — Arizona’s largest and busiest airport had a record-setting year in 2019. 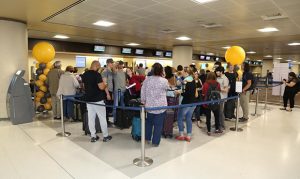 Phoenix Sky Harbor International Airport broke its year-old passenger traffic mark with more than 46.2 million people served during the calendar year, according to a press release.

The jump was a 3% increase from 2018, when about 45 million passengers used the airport.

“The record-breaking number of passengers Sky Harbor saw in 2019 is another data point highlighting the importance of investing in our airport,” Phoenix Mayor Kate Gallego said in the release.

The record year comes on the heels of an especially strong month of December for the airport.

There was a 9% increase in passenger traffic during the month in 2019 compared to 2018, according to the release.

Sky Harbor also had 70% origin and destination traffic for the year, so most travelers were using the airport as their start or end destination.

The airport has been preparing for growth by introducing a number of updates.

A 2.5-mile PHX Sky Train extension, the Terminal 3 modernization project and construction on a Terminal 4 extension were among the projects that progressed in 2019.

The $590 million Terminal 3 modernization project was completed and unveiled on Tuesday.

The airport added new seasonal and year-round flights to places such as Frankfurt, Germany, and Chihuahua, Mexico.